Hey everyone! We’ve spent the past week doing pixel art stuff and even some development on Collider! We have a new game mode called Serpentine coming out soon and it’s going to be great. It’s hard to describe without showing people, but it involves linking chains of squares, stealing your opponent’s squares and surviving with the most amount of squares. That probably makes no sense!

Stephen has been working full time on the Wet Blanket things. He has the expansion set almost fully colored and will be finishing up the other things hopefully this week. Here’s a snippet of what the expansion set might entail: 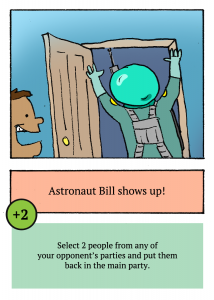 Everyone loves astronauts. Unless they’re jerks. They mostly reside in space so it’s hard to tell sometimes.

The website is also being reworked this week and should look different sometime soon! We’ll have all our games up for sale and that should make them easier to find. Got any suggestions for our site? Let us know!