Hey everyone! Wet Blanket is finished and should be ordered this week! The expansion deck is very close to being completed as well (it just needs some iconography work). We had a good time play testing it with some friends at the local library last Saturday which went very well. Much party destroying happened and we’re all better introverts for it.

We’ve got so many games in development right now it makes my head spin just thinking about it. Let me try to put in a plug for all of them:

Egypt: We’ve actually been waiting to develop more on this one since Wet Blanket has been a high priority. The menu looks dang good though!

Wet Blanket: This one is on fire and almost out the door! Expect it to be under the tree this December! Gah!

Super Secret Space Jets Game: It’s not actually called that, but we’ll go with that for now. It’s early in development but the space jets shoot and enemies die! It’s great! Here’s a screen cap: 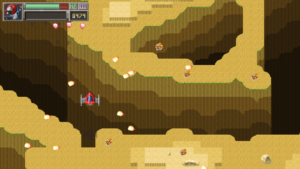 Boom! So many bullets and destruction. Cool!

Collider: Braxton has been working on a new game mode for this one. We’ve also put in much time contemplating how to do multiplayer over the network but it’s proven to be quite the task. Soon though!

Hexapod Defense Force: This game on currently on Steam Greenlight! Joseph has put in a good amount of time getting the game running again and that one is ready to go! We just need votes!

These games are our main focus at the moment, and hopefully we will have more good news to come in the new year. Things are looking good though! We’ll keep pushing ahead! As always, thanks for sticking with us.